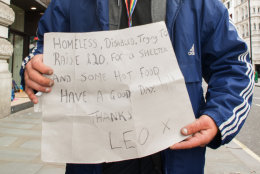 It is quiet at 9:30 Sunday morning, and there are still sleeping bags and other odd shapes in many of the shop windows and doorways along Piccadily. Outside Nero's there is a neat cardboard mat with sleeping bag rolled up nicely to one side. The owner is not there, but two doors down, bending over collecting up all the tiny pieces of rubbish at the edge of the building onto a small sheet of paper. He straightens up, smiles and says "Don't want ... you know ... the place to look bad.". Introduces himself as Paul. "Leo - that's just for the card". He has plenty of interesting things to say, is good humoured and easy to spend time with. He proudly talks about his children aged 4, 3 and 2 but does not know where they are now. Used to be a plasterer, but his injury makes that impossible now. Someone suggests maybe he could teach plastering. "How many plastering teachers have you ever heard of?" he replies, and adds it might be easier to become Peter Pan in Never-Never Land. 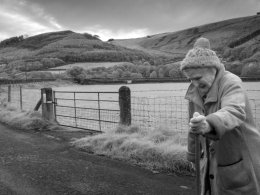 Standing sure with her staff, she looks down and thinks for a moment how to answer. "No, it isn't easy. They say farming is like copper or gold ... but mostly it's copper". Been in the valley for 50 years, since she got married. Now her son is bringing in the cows with the help of a dog and a quad bike, while she stands guard in the middle of the road to make sure they all turn the right way up to Ty Cam farm. 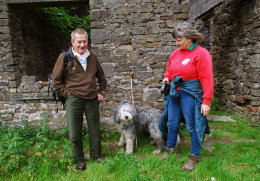 "Do you know where you are? ... This is my Grandmother's house."

This farmhouse at Cilfach Bronwedd was last used in 1937. The grandmother was left on her own and moved out down to Glyn Neath. Today the roof has gone and a large oak tree reaches down inside to reclaim ownership.

The grandson, like his brothers and everyone else in the area, made his living in the coal mines. His daughter points out that he is now eighty, with arthritis, but is still very fit. The secret is to keep walking.

"Shall we have tea in the parlour?" he smiles as they all go inside. 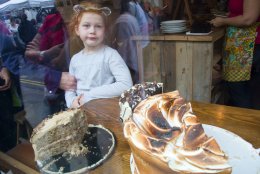 The cake shop is packed full, and a long queue spills out into Brick Lane, blocking the pavement . A mother is looking into the window, while her daughter and husband stand patiently inside.

"Can I take your daughter's picture, with the cakes, just like this, through the glass ?" The mother nods. The daughter smiles at first, then frowns a little as she realizes that her mother has betrayed her so easily. 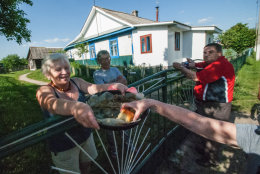 "We're all Slavs here" she says leaning over the gate to share out freshly baked cake with strangers.

A big yellow bus full of Poles has turned up unexpectedly in a Ukrainian village and parked in front of her house.

A few of the visitors have disappeared down the road to hopefully identify some mark where their family home had once stood, anything at all, perhaps a fruit tree neglected and out of place.

The rest of the visitors step off their bus to stretch their legs, and share a moment of understanding with the locals, an echo of the understanding their families had had once before when they were living together as neighbours. 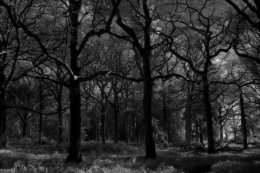 Compared to a town park, it looks wild and daunting, but it took me a while to realize that nothing here is ancient or natural ... unless we can count people and sustainable land management within the definition of what is natural.

This cathedral-like oak grove has all its trees of a similar size and age, possibly a legacy of some Napoleonic war resulting in the loss of the best oaks and a demand for more, and usually bred from the poorer oaks left behind.

The nettles that fill this grove in summer suggest that it was planted on former agricultural land or meadows. 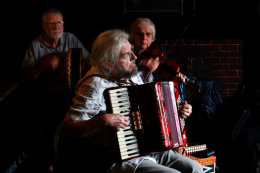 Stepping into the Red Lion, there is music, and I stop suddenly as the gentle tune takes shape as Margaret's Waltz, a favourite old friend of mine. The performers are visitors from different parts of the country, playing a wide variety of folk instruments. But the sounds blend well as if they had always played together.

I ask around for help putting names to faces. "That's Dave Townsend on the accordeon. The rest I don't know". "Thanks ..., and what about you?". My guide turns out to be Ian Giles of Magpie Lane. And the couple at the back, they made enough impression for me to approach them later for their card: Flora and Andy Green, Rakes of Rochester. 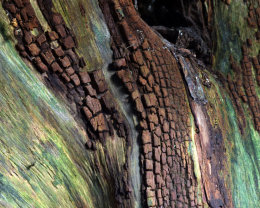 The yew is slow growing, long-lived and has the ability to decay on the inside and regenerate on the outside, giving characterful thick shapes and colourful wood and bark.

This yew is at Kingley Vale, one of the most ecologically significant yew forests in Europe. And the United Kingdom also has maybe 90 percent of all the remaining ancient yews in Europe. Ironically, this state of affairs is attributed to systematic and catastrophic destruction of Europe's yew forests to satisfy the English demand for slow growing high-altitude yew wood to make up the most powerful longbows.

"The yew is a pure native of Britain, and was formerly what the oak is now, the bafis of our ftrength. Of it the old Englifh yeoman made his long-bow; which, he vaunted, nobody but an Englifhman, could bend. In fhooting he did not, as in other nations, keep his left hand fteady, and draw his bow with his right: but keeping his right at reft upon the nerve, he preffed the whole weight of his body into the horns of his bow. Hence probably arofe the Englifh phrafe of bending a bow; and the French of drawing one." REMARKS ON FOREST SCENERY; AND OTHER WOODLAND VIEWS, W. Gilpin, 1791, sourced at http://ota.ox.ac.uk/text/4825.html on 6/12/2015. 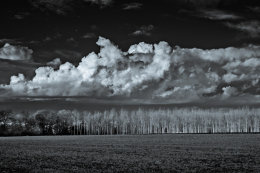 Friends at the Oxford Photographic Society have provided a source of inspiration ideas expertise and critical feedback.


Many thanks to Keith Worthington for encouragement and for help with setting up this website. 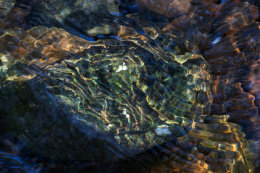 "And this our life, exempt from public haunt,
Finds tongues in trees, books in the running brooks,
Sermons in stones, and good in everything. "